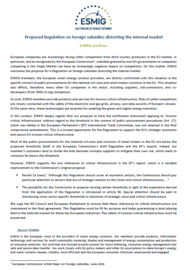 European companies are increasingly facing unfair competition from third country producers in the EU market. In particular, and as recognised by the European Commission, subsidies granted by non-EU governments to companies competing in the Single Market can have an increasingly negative impact on competition. On this matter, ESMIG welcomes the proposal for a Regulation on foreign subsidies distorting the internal market.

ESMIG members, the European smart energy solution providers, are directly confronted with this situation in the specific context of public procurements for the national roll-outs and smart meters solutions in the EU. This situation also afflicts, therefore, many other EU companies in the sector, including suppliers, sub-contractors, and co-developers (from SMEs to big companies).

As such, ESMIG members provide products and services for mission critical infrastructure. Risks of unfair competition are closely connected with the safety of the electricity and gas grids, privacy, and data security of Europe’s citizens. At the same time, these technologies are essential for enabling the green and digital energy transition.

In this context, ESMIG deeply regrets that our proposal to have the notification instrument applying to ‘mission critical infrastructure’ without regard to the threshold in the context of public procurement procedures (Art. 27), which was tabled in the European Parliament’s (EP) International Trade Committee, was not retained in the final compromise amendments. This is a missed opportunity for the Regulation to support the EU’s strategic autonomy and secure EU mission critical infrastructure.

Most of the public procurements for the national roll-outs and solutions of smart meters in the EU are below the proposed thresholds (both in the European Commission’s draft Regulation and the EP’s report). Indeed, our member’s customers tend to divide the bids between multiple suppliers to mitigate their own risk, which leads to contracts far below this threshold.

However, ESMIG supports the two references to critical infrastructure in the EP’s report, which is a valuable improvement to the Commission’s original proposal:

We urge the EU Council and European Parliament to ensure that these references to critical infrastructure are maintained in the final agreement. This Regulation must be fit for purpose and helps guarantying a level playing field in the internal market for these key European industries. The safety of mission critical infrastructure must be preserved.